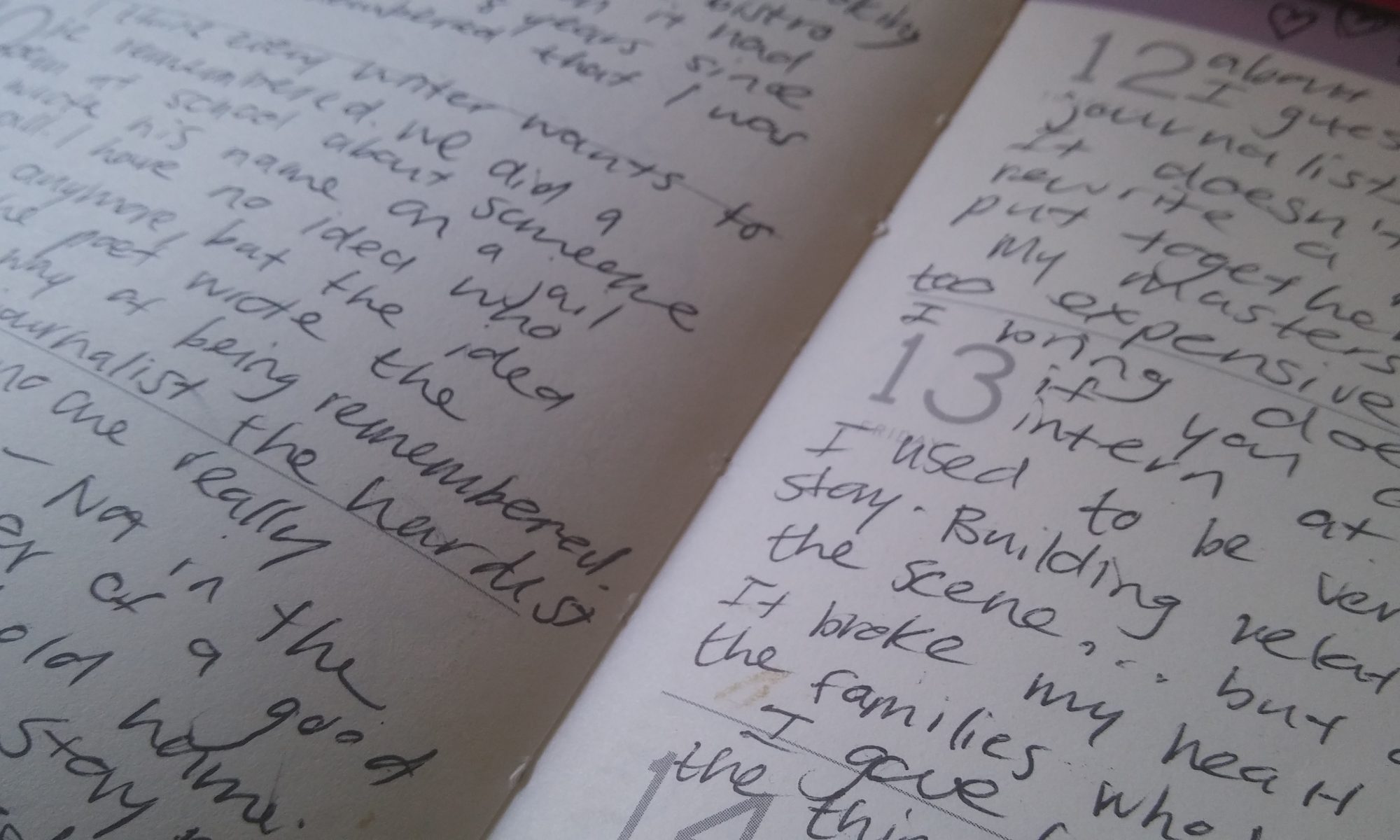 Said someone last night: “It’s nice to be remembered.”

This after a guy recognised me in the bistro I work most nights. To my estimation it had to be 7 or 8 years since we met. He remembered that I was a writer.

I think everyone wants to be remembered. I recall a poem from my years at school about someone who wrote his name on a jail cell wall – his way of being infinite. I can’t remember who wrote it anymore, but the whole idea was that the poet wrote the poem as his own way of being infinite. In a way, it worked. The idea of the poem has always been in the back of my head.

I guess as a journalist the hardest thing is that no one really remembers your name. Not in the sense that an author of a great book becomes a household name. Think Elliot, Bronte and Hemingway. When it comes to a news article, however, readers are only interested in the facts of the article. They don’t care about who it was that wrote the words or the blood and tears it took to put pen to paper. Most people knew who I was, yet couldn’t remember my name … only the name of the paper I worked.

I guess that’s why journalists are so irreplaceable.

It doesn’t take much to rewrite a press release or put together the facts.

My masters degree makes me too expensive and the experience I bring doesn’t mean much if you can appoint an intern at a quarter of the cost.

I used to be very very good at chasing the story, building relationships. Being first on the scene … But at what cost?

It broke me. It broke my heart to have to interview the people who had just lost someone to a crime committed in their home or in an accident. The job you have to do as a journalist is extremely important. You are the voice of your community. You are the one to warn families about all the bad that happens around them. The voice of reason. Of caution. The messenger.

I gave up that life to write about the things I wanted to write about. Another journalist once told me: “You’re like me. You have to write. The ink flows in your veins.”

Yet, if someone asks me what I do for a living it is difficult to say. I have seven bosses, including the one at the bistro where I am “Elbé the waiter”. (There is only one letter difference between writer and waiter for a reason I think … )

So I traded. Not up or down, but to something completely different.

And tonight it was just nice to be remembered. Even if he could probably never say what exactly it is that I wrote.

UPDATE: I had to call my Afrikaans teacher to find the poem I referred to. As it happens it is part of the matric curriculum! It’s called “Besoekersboek” (Visitor’s book) and written by Fanie Olivier. You can read it here.